Frankie’s dream of driving a dragster began when she was six years old.

Here is how the story unfolds.

Frankie’s father Eddy moved back to Edmonton, Canada, in 1993 from Dallas. While there, Eddy had purchased a 1948 Ford Anglia body. Upon his return he started to build a drag race car using the ’48 Anglia. After two years, the car was ready to race. Eddy debuted his racing career in the spring of 1995 with the Anglia that he proudly built. 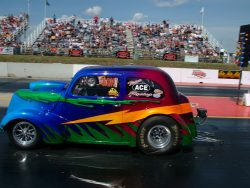 From the start, it was a family affair. The whole family would join Eddy and his Anglia at drag racing tracks at both Edmonton and Calgary, Canada. The racing series would take the family outside the province to Ashcroft and Mission, British Columbia, Seattle, Washington and Boise, Idaho. During these years Frankie enjoyed the weekends at the track, playing with other kid, life was fun.

When Frankie was 10, Henry Hearn gave Eddy a junior dragster to get the both Frankie and her younger brother Casey started in drag racing. The rightly named it “The Hearnburger”.

The dragster needed a motor since it didn’t come with one and had to finish the car to meet NHRA Jr. Dragster rules and specifications. Therefore, a family project was born. With the kids input, the dragster got painted, lettered, safety harnesses installed. Then the kids got fitted with racing suits and helmets

After the car was completed and ready to race, Frankie’s first time in it was on the street in front of the house. She needed to get used to sitting, steering, and hand controls and driving it, before they took to the drag strip. Eddy would stand on the back-frame rails as Frankie learned and practised driving on our street. Eddy’s hand always on the kill switch. It was only a short amount a time before she was ready to race in the Nitro-Ratz Junior Racing Club at the local drag strip

With Casey as Frankie’s crew chief, he excelled at instructing her on the ins and outs of drag racing. The two of them would talk for hours about drag racing as they became interested in the NHRA and the Jr. Dragster series. started to follow the NHRA series.

Frankie was a natural, she picked it up very quickly. She did very well in reaction times against the start line tree. Casey crewed with her and together ended up sharing the Jr. Dragster. Her pursuit to be a champion was evident even at an early age, with a competitive nature that ran deep. Too fuel her passion for drag racing Frankie would race The Hearnburger at the local dragstrip in Edmonton & Calgary, Mission & Ashcroft, British Columbia, winning both locally and at Ashcroft.

Watching her father race his super comp dragster was a real inspiration. The red and white paint scheme with the Team Ace Racing brand, was a stand-out every time it appeared on the dragstrip.

Eddy was a key influencer to get Frankie started racing, and without him the opportunities I have had in the sport wouldn’t have existed. Drag racing racing is very hard to just get into and most racers have a strong family history or legacy in the sport. 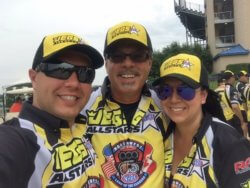 As Frankie got more competitive conversation led to her telling her dad when she turned 16 she dreamed of racing a dragster of her own. It was a sweet 16 when Eddy passed down his dragster to her when she turned 16. In order to run the full-size super comp dragster (primary dragsters running the 8.90 index) Frankie would need to earn her NHRA license. This was achieved at Mission, British Columbia dragstrip.

When it came to a professional NHRA drag racer who provided Frankie with inspiration, it was none other than John Force. John Force has built a legacy over decades and has been one of few drivers to successfully navigate the changes that have come to professional drag racing over the years. This constant adoption, passion and his dedication to family is something Frankie can relate to. Her passion for winning and her dedication to her own family is something that propels her to succeed.

As much as her dad influenced her to start and John Force, providing inspiration, it’s her brother Casey that has been a mentor since she was very young. Casey was the one to coach Frankie season after season, year after year, in both the good and the bad.

“Casey is always willing to learn when it comes to our sport and our cars, so his advice is ever evolving and keeps up with the changing nature of the sport”. said Friankie.

It is very evident that family is so important and the Plaizier circle cannot be broken. Every success that Frankie has achieved comes from her family and how they have supported her through my racing career. It doesn’t matter what happens at the track, they always do things as a team. According to Frankie, it’s what makes racing fun, that they are all together and participating in something they all love and are passionate about.Even on the weekends when they all lose in first-round they are still happy to be out at the track together. 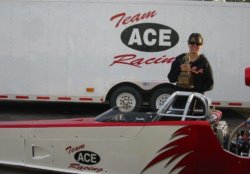 Frankie earned her first win at the NHRA National Open in Ashcroft, British Columbia racing the same Team Ace Racing branded super comp dragster her dad gave her. The following year Frankie moved over to Top Comp where she competed against cars and dragsters that ran the 8.90 index.

Now in her late teens Frankie continued her competitive nature in Top Comp then in Super Street (10.90 Index). Striving to be a champion in the Super Street Class, propelled her to be the best in another class, University. Frankie would go on to earn her CPA in accounting during the drag racing off season.

When it comes to what many like to refer to as balancing family, career and racing, Frankie likes to think of it another way. She prefers to look at as an integration of life pieces, and it’s not about trading one section of her life for another. Frankie likes to throw everything on the table and figure out how it all fits together. Thankfully her family and racing go hand in hand, so that part comes easy.

With all sports there are key takeaways that you apply to one’s personal life. For Frankie it’s ok to lose or fail repeatedly. In racing you lose a lot more than you win, so it’s important to understand how to handle failure with grace and pick yourself up and try again.

When asked what do you say to other young females looking to follow Frankie’s path, she responded with “to just try, it’s like any other sport, if you are passionate enough about it you will find your way”.

The support goes beyond family, with her business partners in the accounting firm she owns and operates, encouraging her racing endeavours. Even the staff at the firm log in to watch her compete when available. This also provides tremendous flexibility for her to travel and time needed to compete during the season.

Even after capturing the 2019 Lucas Oil Drag Racing Series Division 6 Super Street Championship, Frankie has other personal goals she strives to accomplish. Racing related she wants another division championship and some NHRA National event titles to compliment them.