For team Kalitta Motorsports the season started on a high note with J.R. Todd’s  first-ever Gatornationals victory and gave him a sweep of the NHRA “Grand Slam” of the four biggest races in the sport – the Winternationals, the Gatornationals, the U.S. Nationals and the NHRA Finals. 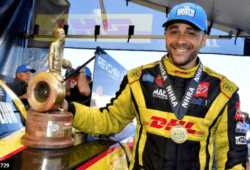 Todd also won the 2018 Funny Car world championship. This was his 19th career NHRA Camping World Drag Racing Series victory and his 10th in a Funny Car since moving to the series in 2017. He becomes just the 18th driver in history to win 10 Nitro Funny Car events.

Driving the DHL Toyota Camry Funny Car, J.R. Todd  says that winning Gainesville ranks right up there with winning Indy, which he has won the prestigious event two times. “It’s one of the biggest races in our sport along with the U.S. Nationals and the Pomona races. It’s one that I’ve always wanted to check off the list, but haven’t been able to.” says Todd.

The Gatornationals is one of the most historic and prestigious races on the tour. For many racers, it’s like the east coast version of the Winternationals and it brings out a lot of the legends of our sport and some great memories.

This is Don Garlits country. When you think of the Gatornationals you think of all the legends of the sport that have won here. Another legend, team owner Connie Kalitta faced off against his son, Scott Kalitta in 1994 in the first father-son Top Fuel final. It was also a battle of the crew chiefs. Dick LaHaie, who was crew chief for Scott and Tim Richards for Connie. Richards twisted all of the knobs in the right direction for the final round, providing Connie all the power he needed to run a 4.79, which was low e.t. of the meet, and outdistanced his son’s slowing 4.95. The victory was the eighth of Connie’s career but his first since 1986.

The start of the 2021 NHRA season are  the first steps back towards normalcy that pretty much disappeared just over a year ago. Let’s hope the NHRA season continues on a positive and safe note, with additional wins for team Kalitta Motorsports.