Thirteen of the country’s best nostalgia funny cars made their way to NHRA Heritage Funny Car Series at Firebird Raceway in Eagle, ID.

This NHRA historic track started in 1968 by the New family hosted the 49th NAPA Ignitor Opener this past weekend. Fans got to witness some of the best side-by-side NFC drag racing action on the ¼ mile track.

In impressive fashion, Ryan Hodgson driving the Pacemaker NFC sponsored in part by ACE Racing, conquered all the challengers that included some of the best NFC drivers: Jeff Arend, Dan Horan and Billy Morris to capture the Ignitor title.

In round one of eliminations, Hodgson made a strong pass to take the win by 79 feet to move into the second round to face Dan Horan who set the track speed mark at 262.71 MPH.

During the Stinker Stores Nitro Knockout final, fans witnessed Ryan Hodgson’s journey to the winner’s circle when he easily coasted past the finish line after Kris Krabill, who qualified number eight, could not return to the start line after the semifinals. 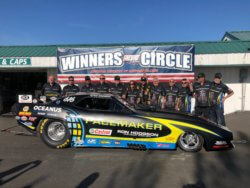 “Sweeping this impressive field of competitors made it really rewarding for the whole crew of the Pacemaker NFC”, said Ryan Hodgson in winners circle.