They say that good things happen to those that wait. For Doug Kalitta, that statement could not be more true than after capturing the win at the Mopar Express Lane NHRA Midwest Nationals on October 4, 2020, at World Wide Technology Raceway at Gateway.

As the racetracks’ name suggests, the weekend was a wild one, with wind gusts, cold track conditions and a day that was marred by delays due to cars that flipped or broke apart.

To capture the win, Kalitta had to wait out several delays because of on-track incidents. The veteran was undeterred by the delays.

“We’re wondering what the delays are really and what’s going on,” said Kalitta. 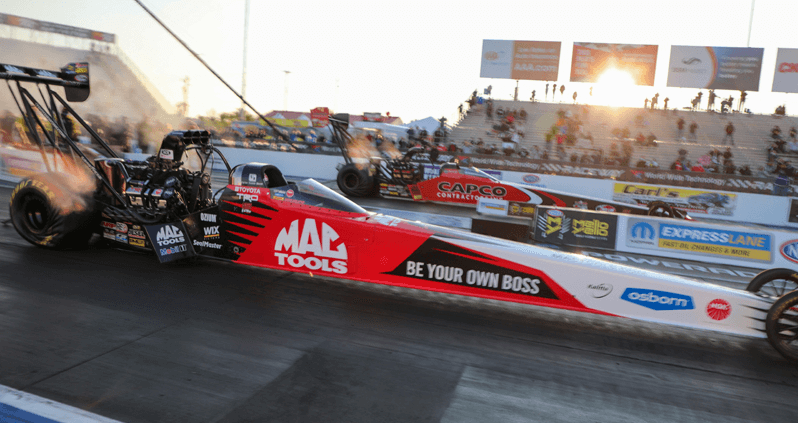 This was Doug’s fourth time at winning the NHRA Midwest Nationals after defeating their closest rival Steve Torrence. Kalitta entered race day as the No. 5 qualifier and knew the chance to go rounds was of utmost importance if he was to stay in the chase for the championship.

Team Kalitta needed to get some momentum going for the last three races, and this win proved so important. He pulled within two points of Torrence for the series lead. A loss would have dropped him back 42 points, after running his quickest run of the weekend, 3.690 ET at 322.58 mph.

In the first round, Kalitta had to race teammate Shawn Langdon and then take out veteran TJ Zizzo in the quarterfinals. Doug managed to lower his best elapsed time in both of those races, with a 3.731 ET followed by a 3.709 ET.

The Mac Tools dragster continued its dominant ways making a single run in the semifinals when Tony Schumacher’s throttle stuck in the pre-race burnout not allowing him to make his run. With no one in the other lane, Kalitta did not let the chance to get lane choice in the final round slip through his fingers. Doug’s solo run elapsed time of 3.711 ET proved he would be the one to beat in the final round.

The win was Doug’s 49th of his career and second of the season. The Mac Tools Top Fuel dragster has appeared in four final rounds this season. Those stats are impressive, but Kalitta has one goal for this season.

Team Kalitta didn’t escape the wildness of the weekend, with smoke erupting from the car after the parachutes were deployed after crossing the finish line for the win. 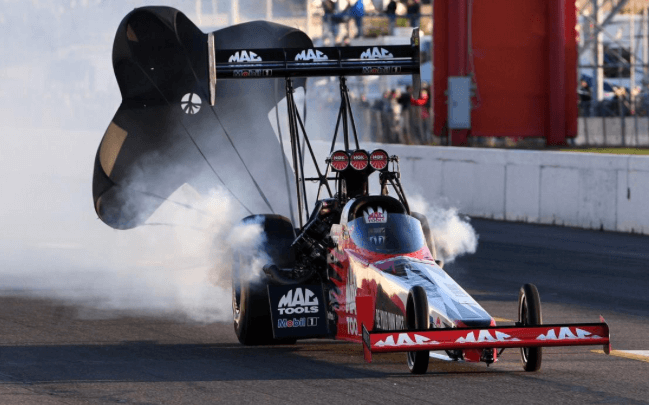 “The championship is the number one prize”

“We’re hoping to get a couple more wins for sure. We have three more opportunities. We’ve got three more shots,” summed up Kalitta.

Those opportunities present itself at the next three races: NHRA Fall Nationals in Dallas, then Houston followed by the NHRA Finals in Las Vegas on October 29-November 1, 2020, where the 2020 NHRA world champion will be crowned.

No Rookie Mistake
Dreams of a Dragster