At this year’s NHRA Rocky Mountain Nationals at Castrol Raceway in Edmonton, Canada, a showdown was taking place. Year-over-year, two home town Edmonton rivals come together to battle it out on the quarter mile dragstrip. Both competing in the Nitro Nostalgia Funny Car class, Ryan Hodgson and Tim Boychuk would again face one another for a chance to stand in the winner’s circle.

Like clockwork, both Boychuk and Hodgson faced off again in the final. In 2018, Boychuk edged out Hodgson, so in 2019 Ryan Hodgson, driving the Pacemaker/Ace Racing sponsored F/C was set to take the title back.

The two top talents again met in the finals, and it was Ryan Hodgson, who with a slightly better reaction time, emerged the winner by a narrow margin. Truly a drag race, it was Hodgson’s 5.844 ET at 246.71 MPH to Boychuk’s 5.840 ET at 250.84 MPH to spoil Boychuk’ hopes for two in a row.

The close race caused some anticipation for both racers, as the actual winner being declared was delayed as race officials reviewed the math to insure the accuracy of the numbers due to a timing system malfunction.

When Hodgson was asked after the win what it felt to secure the win his response was rather brotherly toward Boychuk.

“We have gone to the final here a few times that’s for sure. Last year Tim edged us out when we had motor problems and he blew by us – so I guess this year it just was our turn. It seems we just swap; the title back and forth”.

Capturing the title was bitter sweet for the entire team who contributed to the win. Ryan thanked all the sponsors, including Harold Parfett of Ace Racing, pictured below.

“Thanks go to all our great sponsors. Our team is the greatest group you could ever race with – we have fun – win or lose. But it’s extra special to win here at our home track”. 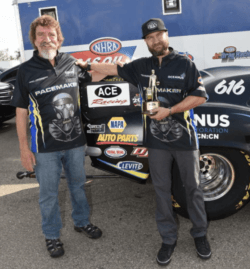 Until next years 2020 Rocky Mountain Nationals, Hodgson will savor the win, but knowing Boychuk’s competitive nature, Ryan knows Tim will be back to try to recapture the title.