After the 2021 Winternations, Eddy Plaizier parked the rig including the Camaro, Firebird, Corvette in Las Vegas, hoping to go back to Vegas, but the Pandemic restrictions came into the effect, shutting down everything.

Eddy decided to fly to Vegas in end of April 2020 and get all the cars out of the U.S. and back home. With limited races in Canada, Plaizier’s took four race cars to the National Open in Edmonton, where they debuted the Anglia. The Anglia had been sitting for two years.

With so much uncertainty in 2020 and heading into 2021, Plaizier’s decided as a family to race a limited number of events, closer to home, running the top dragster, sportsman super street and super gas programs

In 2021 knowing they could not travel to the U.S. they made a couple of changes. One was acquiring a ’56 Chevy Belair for Casey to race and two, selling the Corvette in July.

In August 2021, NHRA gave Plaizier’s an exception to travel to the U.S. to race. But with Las Vegas as the only race Eddy could run, because the other classes were not running, Eddy decided to stay home and concentrate on building the Anglia and the ’56 with Casey. 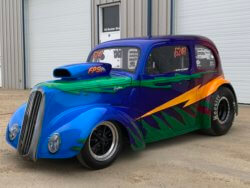 This provided time for Eddy to get the Anglia out of storage and start rebuilding it. The desire to rebuild it was for nostalgia reasons. During 2021 the Plaizier’s built and finished the Anglia, the ’56 Chevy, the Firebird.

The Plaizier Motorsports 2022 race schedule is dictator by the classes being run, for example there is no Super Street at the National event in Las Vegas. But where all three can run together as a family, they will do so. After the divisional race in Vegas, their next opportunity is the Divisional race June 10-12 in Seattle, WA. After that, all the Plaizier’s head to the following races:

In October Eddy takes the Anglia back to Las Vegas on the 27-30 where he will be racing without Frankie and Casey. A week later, all three compete in their respective classes for the final event of the 2022 NHRA race season at the Divisional race in Vegas, November 4-6. 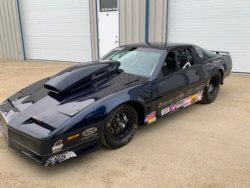 Plaizier Motorsports also plans to run the two local races at Edmonton, AB in June and July respectively. This is an opportunity to show their appreciation for their Canadian based sponsors. Two of their biggest sponsors are RAD Torque and Thompson Brothers Construction.

When it comes to Eddy’s future, he plans to keep racing for years to come, but approaching it more conservatively from an MPH perspective. Running either the Firebird or the Anglia allows him to do so.

Future plans for Frankie, she plans to wed her fiancé, fellow Stock and Super Street racer from Seattle, WA in May 2022.

For Casey the ’56 is new for 2022, it’s an engineered work of art that needs to be appreciated. If the attention to detail that went into its build is any indication, its performance on the track will show up on the timing slips.

The long-term plan is to stick with the three race cars, the Anglia, Firebird and ’56 Chevy Bel Air. Their versatility allows Plaizier Motorsport to take them anywhere and continue to run together. After all, this is a family affair.