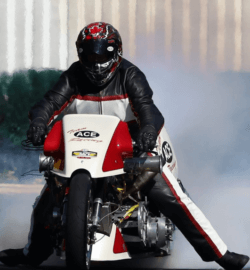 With the 2019 NHRA drag racing season completed, we take time to reflect on the passing of the fastest Canadian Nitro Harley drag racer, Kevin Boyer. Kevin left us on October 18th, 2019 at the age of 56. Kevin Boyer was from Edmonton, Alberta, Canada.

Kevin’s career spanned 40 years and ran a best 6.26 ET that will forever cement him as one of the quickest Canadian Nitro Harley motorcycle riders. For much of those years he was supported and sponsored by ACE Racing.

In one of Kevin’s last interviews, Kevin was asked to recount his greatest racing memory, Boyer said, “I can’t. There are too many. I just love this sport.”

“Kevin was an inspiration to all who met him and a true champion”, Harold Parfett.

A First for Frankie
Season Ends the Way it Began