They say everything is bigger in the Lone Star State. It was certainly that way at the 34th annual AAA Texas NHRA Fall Nationals in Ennis, Texas for the Plaizier family.  A Texas-size celebration was in store for Casey Plaizier who captured back-to-back event wins at this historic race and his fourth NHRA National event victory.

This is part of the NHRA Mello Yello Countdown to the Championship playoffs this was the fourth of six races. It is also the 22nd of 24 events in during the 2019 NHRA Mello Yello Drag Racing Series season.

Going into eliminations, the ACE Racing backed Chevy Corvette held the number on qualifying spot with an impressive 9.900 ET, (based on a 9.90 index) at 151.87 MPH.

The team endured six rounds of eliminations on their way to victory to capture the win running a  9.913 at 160.16 MPH over challenger Tim Nicholson in his Chevy Camaro who posted a 9.922 at 106.16 mph in the final round. Casey used a unique strategy for the win, edging out Nicholson by 7 thousands of a second. Check out the highlight video below.

“Sweeping this impressive field of competitors made it really rewarding, especially making it two in row”, said Plaizier in winners circle. 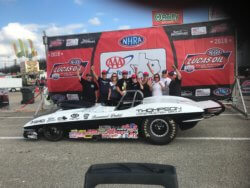 wins at NHRA National and Division races on both sides of the boarder.

Season Ends the Way it Began
This One’s For Connie