The NHRA U.S. Nationals. Generally considered to be the most prestigious drag racing event in the world due to its history, size, and purse, held annually just outside Indianapolis, IN.

Lucas Oil Raceway as its now called, plays host to the longest-running Labor Day motorsports event in the United States, with the events final round taking place on Labor Day. Before it was Lucas Oil Raceway it was just called Indianapolis Raceway Park. Everyone in drag racing knew it as the crown jewel of drag racing, some would refer to it as the “Super Bowl” of drag racing. However you wish to call it, it means everything to win at U.S. Nationals.

Dating back to its inaugural race in 1961, the race has crowned many winners since then, including Connie Kalitta who drove the American International backed Top Fuel Dragster to the winners circle in 1994. Fast forward 25 years and victory smiles on the Kalitta family again, this time with Connie’s nephew Doug Kalitta.

“I just can’t say enough about everyone that’s been working on my Mac Tools Toyota – and (team owner) Connie  was right there with them. Having him in our corner is awesome. It feels great to win a big race that Connie won.” said Doug Kalitta

Doug Kalitta and the Mac Tools Top Fuel dragster turned on the most notable win light of the veteran driver’s career today when the four-time Indy finalist became a first-time winner at the NHRA U.S. Nationals.

It was a battle getting to the elimination rounds, ending up as the number 8 qualifier in Top Fuel at the NHRA Mello Yello Drag Racing Series. Kalitta’s best qualifying run was a 3.706 ET at 332.75 MPH. In the 5thand final round of qualifying Kalitta ran a 3.733 ET and 324.90 MPH to stay at number 8 going into Labor Day’s elimination rounds.

To get to the winners circle the Mac Tools Toyota TF dragster team had to defeat Clay Millican in round one.

“I’m a real persistent guy, so I never give up. It does make you wonder. When we got by Clay I was thinking this is going to be a good opportunity and I’m just glad we were able to take advantage of it,” said Kalitta.

In rounds two Kalitta captured the win against Brittany Force. “I just try to stay patient and make sure I go when that light comes on. We try not to worry about who’s in the other lane, but Brittany’s car has been on a rail. She qualified first, so we knew we had a tough run there and it was a close race,” added Kalitta.

Next it was Austin Prock in semi-final round action. Prock the number one qualifier was Kalitta’s next opponent for the Mac Tools team. Kalitta convincingly defeated the rookie Prock with a solid 3.757 ET.

Now with a fourth U.S. Nationals final round appearance on the line, Kalitta faced Billy Torrence. Unlike in the semi’s, the final round proved to be more labor intensive.

For the second year in a row it was Kalitta and the Mac Tools dragster wanting to taste victory with their first U.S. Nationals win. In a dramatic final round fashion Kalitta and Billy Torrence launched together with Kalitta holding a slight starting line advantage. As both dragsters powered down the track they were neck and neck before both race cars hazed the tires and lost power just before the finish line. It was Kalitta who had the edge and momentum to get to the stripe for the win.

The win was the 46th in Doug Kalitta career but more importantly his first at the most prestigious drag race in the world. A race that Connie Kalitta won 25 years earlier.

This one’s for Connie. 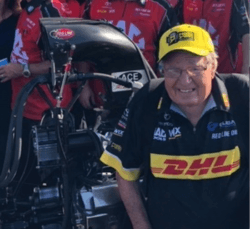