It all started in 1972 when Ron Hodgson partnered with Gordan Jenner with the first-generation Pacemaker Bubble Up Branded Funny Car. The driver was legendary “240 Gordie” Bonin who ran in the low 6’s at 244 mph. After winning the six NHRA National events, including the U.S. Nationals at Indy in 1979, setting the world speed record at 245 MPH, then the car was retired in mid-80’s. Then in 1990, Ron decided to resurrect the Bubble Up Funny Car, building the second generation to similar specifications of the first one. Driving it would be none other than Terry Cap.

When Capp went to California to test the car it ran 5.90 ET and 230 mph during its first pass. Gordon Jenner who was tuning the car at the time said, “I can really crank this thing up – go quicker or go faster”. Ron’s son Ryan, who had the privilege of hanging around Gordie Bonin, decided he wanted another Pacemaker Bubble Up Funny Car.

Ron’s answer “go ask your mother”. Well, here we are today in 2022 with the third generation. 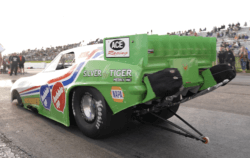 During its inauguration at the 2022 NHRA Rocky Mountain Nationals in Edmonton, the Bubble Up Funny Car, sponsored by Team Ace Racing, ran a respectable 6.27 ET at 231.96 MPH on its last pass Sunday afternoon in the Nostalgia Funny Car (NFC) class. As Ryan said, they made so many adjustments to the new car overall during the two days of testing. “The car went from impossible to drive, too difficult to drive, to drivable”, said Ryan.

Pleased with the overall performance of the Pacemaker Bubble Up Funny Car, the team took the car and tune-up to the NHRA California Hot Rod Reunion at Famoso Raceway in Bakersfield, CA this past October. Running in the Nostalgia Funny Car class, the car ran 5.717 ET at 251.16 MPH in round one, before bowing out in round two with a 5.653 ET at 245.04 MPH to Billy Morris who posted a 5.601 ET at 249.07 MPH.

As the 2022 NHRA NFC drag racing season comes to a finish, the Ron Hodgson Pacemaker Bubble Up Funny Car looks ahead to 2023 to run a full event schedule in its bid to repeat its history of winning.

This is a Family Affair